These slipper socks are pretty easy to make, using only the Half Double Crochet Stitch. They are worked in one continuous piece, meaning no stopping here and starting over there, or no sewing pieces together. I used variegated yarn to get the interesting color pattern without having to switch colors. I refer to them as "women's" because they will fit most size women's feet, though I included notes in the pattern to adjust the sizing for feet that are shorter/longer or wider. The feet in the photo are womens US size 9, but the socks are stretchy to fit multiple sizes. The written pattern with notes is below and the video pattern is at the bottom of the page, which includes the exact same written instructions on screen while also showing you what to do, so you can reference it if you get stuck. Enjoy!

- I used Caron Simply Soft Camo yarn. Any similar weight yarn will do. If you use a different weight, your finished product may not be the same size as mine, though I included suggestions in the pattern if your slipper is not the right size.

- Scissors and yarn needle, only needed for finishing off.

Increase: Add a stitch to round.

Decrease: remove a stitch from round by combining two stitches- instructions included in pattern.

Begin with a magic circle and CH 1.

At this point, the circle won't really lay flat anymore as the edges start to curl in. This is because we are no longer increasing. After Round 5, the diameter of the circle should measure about 3 inches.

After 13 rounds, the closed toe portion of the slipper is complete. The wrong side (where the beginning yarn string is) is the inside of the shoe. Now would be a good time to slip in on your foot to make sure the width fits. It should fit snugly.

SIZING: If the slipper is too tight to get your foot in, you can either add increases on RND5 to make it wider (counts will be off for the rest of the pattern) or redo use a larger crochet hook.

Next up is working the flat part of the shoe:

Next up is working the heel of the shoe. Don't worry if the slipper looks way too small. It will stretch when you put it on. It is supposed to fit snugly.

SIZING: If slipper is too long (or too short), leave off (or add) an even number of rows between rows 6-13 or 15-23. If you leave off or add an odd number of rows, you will end on the opposite side of the shoe than I did and the edging instructions won't match up.

Next up is increasing ends so the slipper comes up slightly in the back to fit over the heel of the foot.

RND 24: Increase at beginning and end as follows: CH 2 (counts as 1st HDC) Turn. HDC in same space (this is the first increase). HDC in next 20 stitches. HDC 2 in CH-2 stitch of previous row (this is the second increase). Count=24

Next up is decreasing in the center, while also increasing the sides. The increasing continues to bring the slipper up over the heal of the foot, while the decreasing rounds out the bottom of the heel so the slipper doesn't stick out in a point.

Now to add the edging and close up the back of the shoe:

If you look closely at the shoe, you'll notice that every two rows of HDC stitches forms stripes (in the texture of the yarn, not the yarn color or pattern). Use these stripes as guidelines for your edging. Begin from where you left off before, with the inside of the slipper facing toward you, CH 1. HDC in corner space, then 2 HDC stitches for every 3 rows of slipper (or between each set of stripes) along the side. When you get to the front of the shoe, HDC in each HDC across. Repeat the edging on the second side of the slipper same way you did the first side. HDC decrease for the last 2 edging stitches. This makes the top of the heel tighter so the slipper stays on your foot. Pull two sides show together to join with a SL ST in the first HDC of edging. Turn heel of slipper inside out and work on the inside of the slipper to join the two sides closed by SC under both loops of HDCs all the way down. (Video @ 14:40).

Cut yarn and weave in ends.

Thanks for stopping by, hope you enjoyed the pattern! 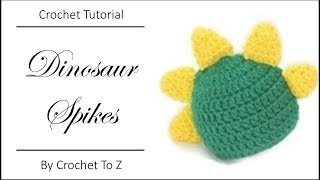 How to Make and Attach Crochet Dinosaur Spikes